By The Patient Genie April 25, 2015
Just off the phone from my cousin Warrick - he is the third generation to serve in his family and has been the ANZAC Day march leader in Bega for some years. I had intended on blogging about his grandfather's service this year, but as most of you will have seen I blogged about my husband's HAMBLYN family.

Wok had questions about his grandfathers service, which I could not quickly answer over the phone, so dearest Warrick, this is the start of an answer for you.

We are lucky in Australia that the only bombing we experienced in WWII did not destroy our early military records as they did in countries Up Over.

The National Archives of Australia in Canberra have digitised the records they hold of Australian Military service during the Great War.

Back in 2002 I visited my Uncle Keith Edward OTTON and was fortunate to be able to scan the images he held of his father, Edward Thomas (Ted) OTTON - the son of Henry and Elizabeth (Bessie) OTTON (nee JAUNCEY).


Ted was the fifteenth born of seventeen children (fifteen growing into adulthood), no doubt signing up was an opportunity to earn a regular income, have an overseas adventure and help him to make his way in the world. He would also have been able to financially support his recently widowed mother, as his father Henry had passed away 16 May 1915 at their Ottonville home near Bega.

Ted served with his mate Dan Gowing in the 30th Battalion

His surviving service records can be found at the National Archives Australia site. They show that Ted signed up on 12 February 1916 and took his oath of enlistment at the RAS Grounds in Sydney on the 7th March 1916. Born and bred in Bega the 29 year old Ted had travelled north to enlist. At these earlier stages of enlistment the average age of those signing up was in their mid twenties.

In March 1916 he was sent to the Battalion Depot AIF at Bathurst and on 15 April he was transferred to the 8th Reinforcements of the 30th Battalion at Kiama where no doubt he under went further training. Ultimately he left for the front on the Ballarat from Sydney on 5 August 1916 heading for Plymouth, finally leaving from Folkestone for the front on the 5 December 1916 on the SS Princess Victoria arrving in Continental Europe on 12 December 1916.

According to the Wikipedia entry for the 30th Battalion entered Bapaume in early 1917.

"After this, for the remainder of the year the battalion had a relatively quiet time but nevertheless took part in two main engagements—Bullecourt and Polygon Wood—where they were employed mainly in flank protection. When the Germans launched their Spring Offensive in early 1918, the 30th found itself in reserve for the majority of the time along with the rest of the 5th Division.[4] Once the offensive was defeated, a brief lull followed in June and July during which the Allies sought to regain the initiative, launching a series of "Peaceful Penetration" operations;[7] at this time, the 30th undertook a number of raids around Morlancourt before conducting an attack there on 29 July. On 8 August, they joined the Allied Hundred Days Offensive that was launched at Amiens on 8 August 1918, spearheading the 5th Division's attack up the Morcourt Valley. A series of advances followed as the Allies gained momentum, pushing their way through the Hindenburg Line defences around the Somme. The 30th's final involvement in the fighting came in late September – early October 1918 when they took part in the Battle of St. Quentin Canal, which saw a joint Australian and American force breach the Hindenburg Line.[4] Following this, the units of the Australian Corps, which had been severely depleted during the fighting in 1918, were withdrawn from the line for rest and re-organisation at the request of the Australian prime minister, Billy Hughes.[8] As a result, they were still out of the line when the Armistice was declared on 11 November 1918. Following this the demobilisation process began and slowly the battalion's numbers were reduced as men were repatriated back to Australia in drafts. Finally, in March 1919, the 30th Battalion was disbanded.[4]" Ref

During 1917 Ted experienced a number of admissions to hospital while he was stationed in France, including a couple for Diptheria. 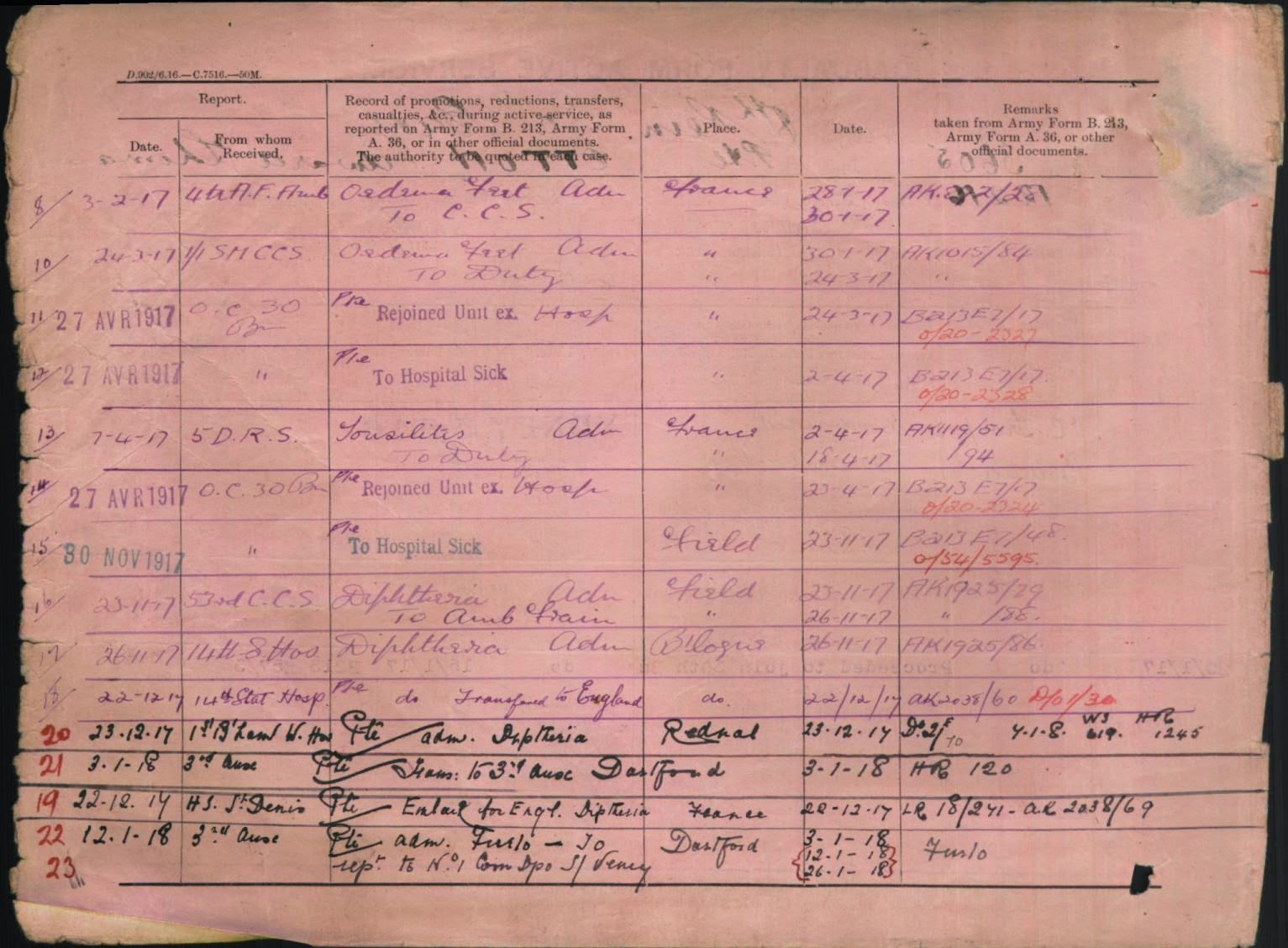 A week after Armistice Ted was AWL from 9am till 10pm on 17 November 1918. I wonder what celebrating he and his mates were up to?

Amongst my Uncle's papers was this small torn clipping of his father's death... 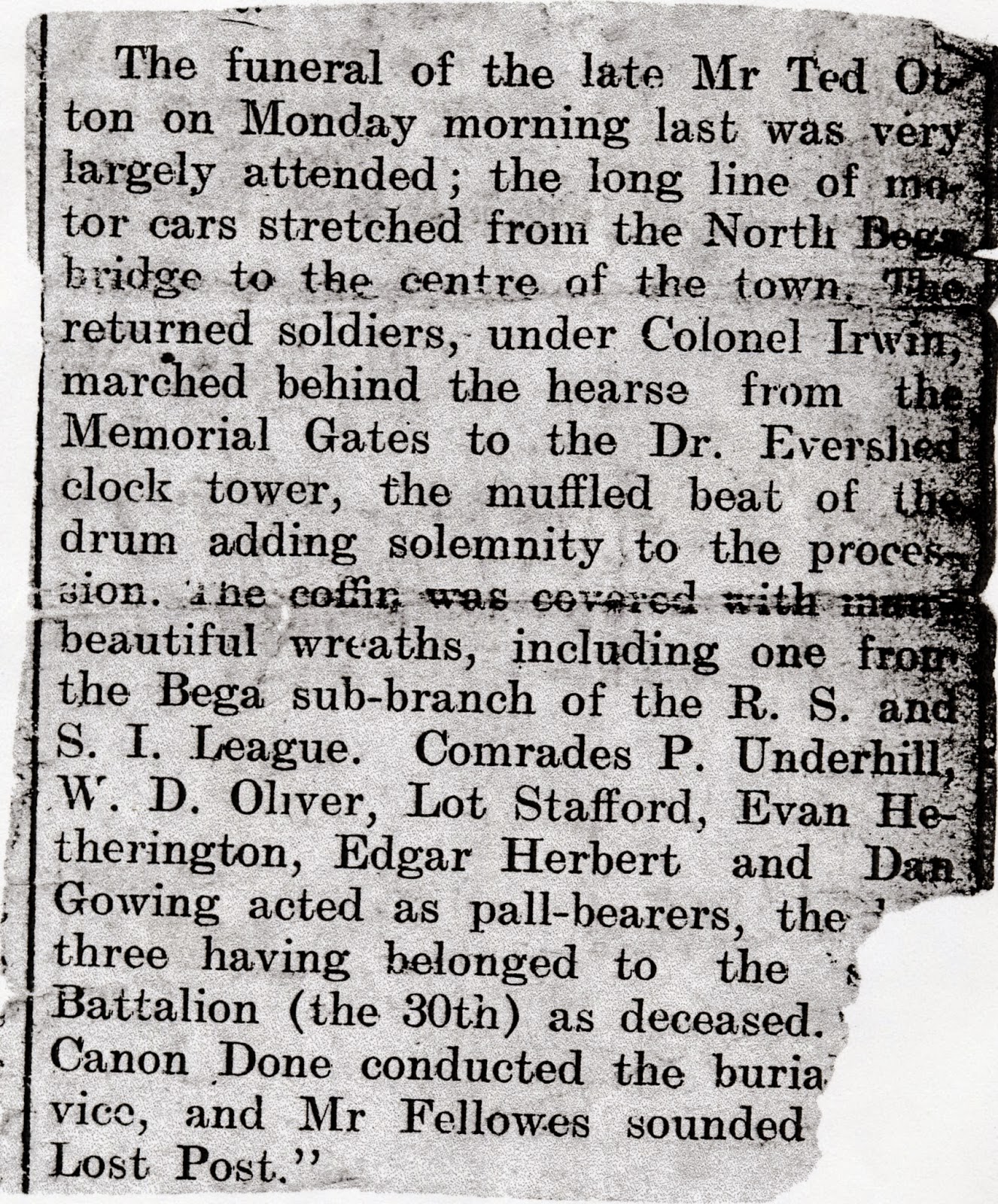 It is said that Ted had health issues from the mustard gas exposure during the war, though I have not seen this specifically mentioned in the records to date.

Today, on the 100th anniversary of the ANZAC landing of the fateful Gallipoli Campaign,

We Remember... Lest We Forget.