By The Patient Genie April 24, 2015
It has been some time since I have posted, focused as I have been on volunteering for various genealogy society activities.

Yesterday I had the privilege to chair the AGM of Te Puke Branch of the NZSG and gave a presentation called Digging for Treasure in Online Newspapers.

One of the images I use in this talk comes from the Taranaki Daily News and is of relevance this ANZAC Day 2015. 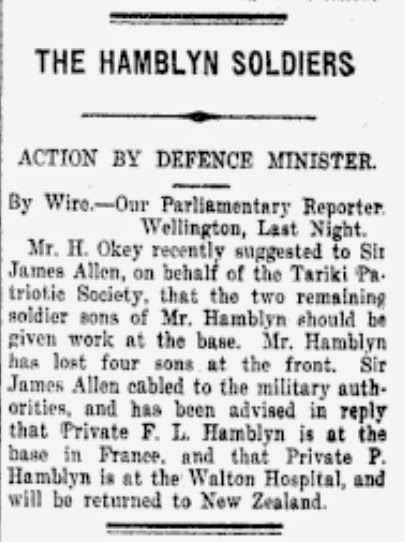 It struck me after giving the presentation that I should look further into this branch of my mother-in-law's family.

So who were "The HAMBLYN Soldiers"? The war service records show that they were the sons of Charles John & Mary Ann HAMBLYN (nee HOSKIN)

According to the book Hamblyn Family History, Plymouth to New Plymouth by M N Shaw pub 1976

"Four Sons: James Edward, Harry John, Thomas Day and William Charles Hamblyn all lost their lives during World War One and their names are on the Monument at Inglewood, in Taranaki."
How could one come close to understanding this family's thoughts and feelings, having six sons serving? Having lost four of them, I wonder at the relief they felt at the receipt of the news that Frederick Leonard was now at the base in France - and Private P though currently in hospital, was to be returned home.

So firstly to honour those who served and paid the ultimate sacrifice:

When searching the Commonwealth War Graves Commission site for the surname HAMBLYN it is sad to see there are only four who served in the New Zealand Forces, these four Hamblyn Brothers.


William Charles HAMBLYN according to the digitized war records held in Archives NZ available via their Archway service, William Charles was born 13 August 1888. The 25 year old cheesemaker signed up on the 29 May 1916 - he was the average age of those who signed up and fought at Gallipoli. KIA on the battle field of France or Belgium 8 June 1917.

James Edward HAMBLYN - born 10 September 1889 James was a Midhurst Farmer working for a Mr Pitts when he signed up on 15 November 1915, after a Court Inquiry he was found to have died at Messines Ridge 27 July 1917.

Henry John HAMBLYN - born 17 November 1896 The youngest of the brothers, Harry as he was known, was working as a farm hand for J Smith of Cardiff, when he signed up with his brother James on 15 November 1915. A Court Inquiry found he was killed in action 3 October 1916.

In a space of just over nine months, all four sons had been killed in battle. Who were FL and P mentioned in the newspaper?

It was easy enough to see Frederick Leonard HAMBLYN on page 128 of the Hamblyn Family History book however no there was no P Hamblyn as shown in the newspaper article.

Frederick Leonard's records were easy enough to find and show he was born 1 April 1896 and despite the news article in 1917 saying he was at base, his Archway records show he was a casualty on 11 October 1918 and there are mentions of cerebation which is slow to improve..

So to the mystery of P in mind I headed to the NZ BDM online indexes for a clue about "P" - which show 13 children to Charles John and Mary Ann:


Richard Ernest looks like the most likely candidate - not only by age, but and R and P can easily be mis-transcribed...

A search of Archway finds that Richard Ernest  born 8 September 1894 enlisted up on 6 March 1916 and a cable is noted in the records dated 25 October 1917 - Ldn in hospital H on Thames. To return to NZ later.

These young men were the first cousins of my husband's grandmother, Irene Ethel PEAT nee HAMBLYN.

The effects of this war hit the family again when the father Charles John died of influenza - as did younger brother Osborne George.


Mrs Hamblyn would have been without her husband when she would have received four Memorial Plaques and Scrolls in commemoration of sacrifice. "He died for Freedom and Honour". I wonder where those "Dead Man's Pennies" are now... 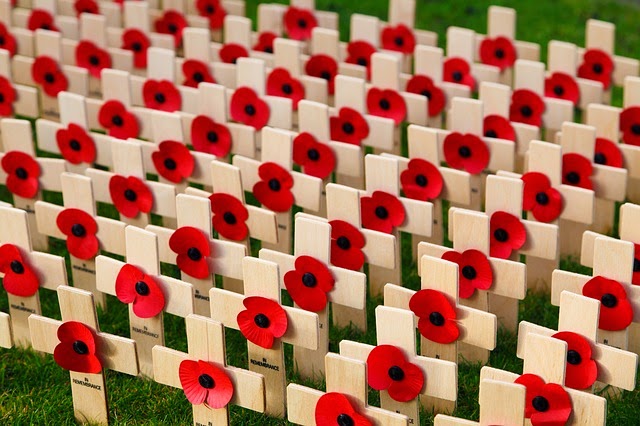 By The Patient Genie February 27, 2021
After the whirlwind that was this years RootsTech - with over 500,000 registrants, over 350 speakers and more than 1,000 videos online to watch via the Expo Hall as well as the Speakers area, we now have time on our side to watch and absorb.  But how best to manage this? You can watch these presentations free via the RootsTech website until early 2022, but here is a tip to help more efficiently manage the ones you want to watch by using the tools within the YouTube environment, which not only shows what you have already watched, has additional tools under the Watch Later option. This is how a session looks within the RootsTech website There are a couple of things you can do from here Either 1) click on the Watch Later button in the top right and do this for all the videos on the RT site so that later you can come into your YouTube account and use the Watch Later menu to watch or reorganise the list into categories (ie: make playlists by topic or speaker). On a mobile device you might
Post a Comment
Read more

By The Patient Genie May 25, 2020
My genealogy mate Christine Clement isn't into social media, so has asked me if I could help find George. Many of you will know Christine from her many talks given around New Zealand, as the hostess of the genealogy website  Sooty  and author of   Migration to New Zealand . Back in April, Auckland Libraries hosted a Military week and Christine gave a talk about New Zealand's role in the Battle of Trieste. So I wasn't surprised when she emailed me for help in identifying George. "In April 2020 the RSA National Office received an email from Italy looking for ‘George’ who had been at the Liberation of Trieste on 2 May 1945 by the 22nd  New Zealand Battalion. The email continued “ It was during a concert or dance intended to bring together these two very different populations, that my aunt and uncles met an officer of the 22nd Battalion. His name was George. Despite numerous invitations to my family to travel to New Zealand, they were never able to visit for va
4 comments
Read more