One of the things I look forward to at RootsTech is the new technology and tools that are released.

On a huge scale the various digitising companies are using machine learning to read handwriting - on those documents we love to get our hands on - we had the 1921 UK Census come out in January 2022 and no doubt my USA genie friends are looking forward to the 1950 USA census release later this month.

What about something closer to home?

Researching a number of unknown photographs that had belonged to my maternal grandmother, turned my casual interest in Family History into an addiction. I look back now and see how much I was striving to find connections within those photographs - and eventually to find someone other than my father whom I looked like.

I grew up as an only child of an adopted mother, living with my parents and my maternal grandmother in her family home. Sadly Grandma (Ada Irene Douglass nee King b 1884) died when I was 7 years old. My father had left his home in England years before I came along, I grew up affected by adoption, the tyranny of distance and being an only child due to the loss of my older brothers at birth. I now realise the combination of these disconnections from family, created a yearning for connection.

Over the years family history has brought me a wealth of relatives and friends around the English speaking world and now I feel more centred and in the right place at the right time. No wonder I call three places home! Australia, England and New Zealand.

On 21 February 2022 my father would have turned 97 and this year it will be 30 years since he died on Father's day (the first Sunday in September in Australia and NZ) so I posted the following photograph on Facebook as it is one of my favourite memories of Dad. I can hear his voice and laughter and see the twinkle in his eyes. Sharing this image and my thoughts and feelings felt important, but I was amazed at the stories and memories others shared in the comments. Including a primary school friend's older brother - I had no idea he met my father! I could never had found out these precious memories if I hadn't shared this one photo.

So imagine my delight when my Ancestry App updated earlier this week - adding the #MyAncestryStory tool. Now I can create a slide show with up to 12 photos from my tree's media gallery - edit them, colourise and share them. The resulting personalised slide show will sit in the Life Story tab. 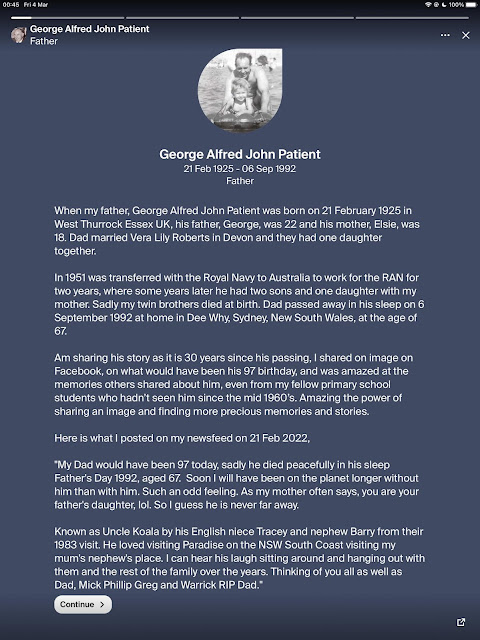 Today Fiona Brooker is hosting a live Recording Memories Workshop at RootsTech 2022 thought many of you might want to pop along and see what this new feature can do.