By The Patient Genie May 25, 2020
My genealogy mate Christine Clement isn't into social media, so has asked me if I could help find George. Many of you will know Christine from her many talks given around New Zealand, as the hostess of the genealogy website Sooty and author of  Migration to New Zealand.

Back in April, Auckland Libraries hosted a Military week and Christine gave a talk about New Zealand's role in the Battle of Trieste.

So I wasn't surprised when she emailed me for help in identifying George. 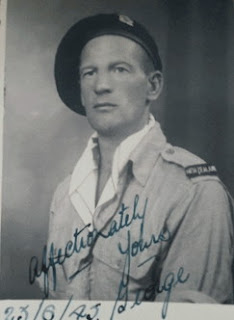 "In April 2020 the RSA National Office received an email from Italy looking for ‘George’ who had been at the Liberation of Trieste on 2 May 1945 by the 22nd  New Zealand Battalion.

The email continued “It was during a concert or dance intended to bring together these two very different populations, that my aunt and uncles met an officer of the 22nd Battalion. His name was George. Despite numerous invitations to my family to travel to New Zealand, they were never able to visit for various reasons, including the great distance and lack of communications of the time.”

What we do know:


If he was in the 22nd Battalion then probably from Wellington, Wellington/West Coast, Hawke's Bay and Taranaki companies.

18th Battalion - Northern Military District, which took in the upper half of the North Island of New Zealand.

19th Battalion - Lower half of the North Island of New Zealand and formed into Wellington, Wellington/West Coast, Hawke's Bay and Taranaki companies.

20th Battalion - A to D and corresponding to the Canterbury, Southland, Nelson-Marlborough-West Coast and Otago districts.

Divisional Cavalry – all over New Zealand"

So basically George could be from anywhere around New Zealand. We are hoping someone recognises the photo or the story about George's Italian connection.

If you know who George was please email Christine cmclementnz at gmail.com.

Thank you in advance...